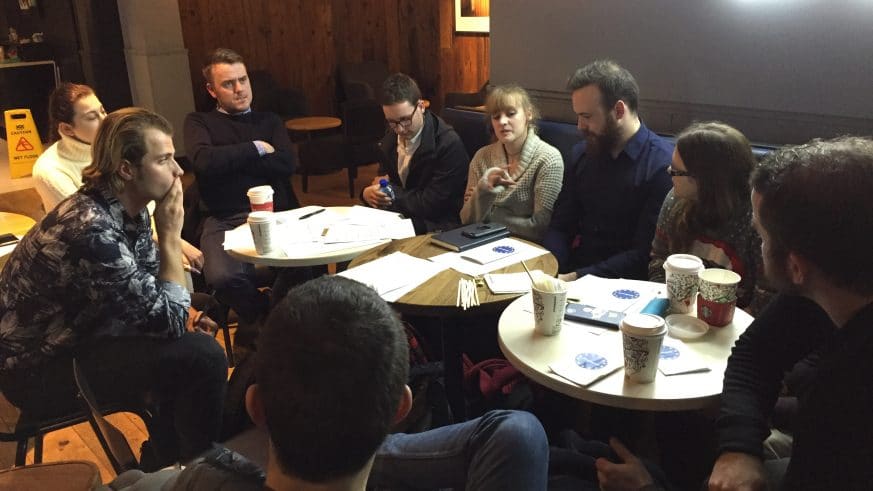 What do young people in Belfast think about Brexit? This question was at the heart of the ‘My Life My Say and European Parliament Brexit Café’, held for people under 30 in Belfast on 8 December 2017. 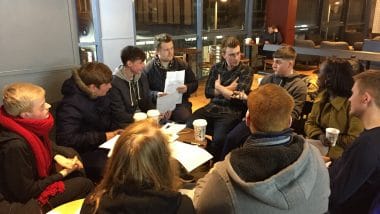 MLMS in partnership with the APPG on a Better Brexit for Young People have been running ‘Brexit Cafes’ across the UK to ‘raise the profile of issues which affect and concern young people in light of the recent EU referendum; to encourage dialogue between parliamentarians, young people and youth services; and to encourage a coordinated and coherent approach to ensuring that the voices of young people are taken into account during the EU negotiations process.’ This past Friday, as a representative of BrexitLawNI, I had the opportunity to facilitate the Belfast Brexit Café, and thought it important to share some of the information that came out of the event.

Naturally, one of the overarching themes that emerged from this conversation was that the young people in attendance wanted the UK to address the concerns that are specific to Northern Ireland. In particular, many of the young people expressed fears about what Brexit is going to mean for the land border across the island of Ireland and the impacts that it may have on the peace process. In relation to these issues, discussion touched upon what the introduction of a border would mean for people’s every days lives in the North, particularly people living in border areas, what impact an introduction of a border would have on the local economy, as well as anxieties surrounding the destabilising effects that Brexit might have on the peace process.

Some of the young people want UK negotiators to focus on issues related to migration. Specifically, the uncertainty that many people have surrounding their immigration status as a result of Brexit was raised. Some argued that the real impacts that this lack of clarity has been having on the daily lives of people in the UK, such as living in fear of being deported, was the primary reason that they want focus placed on this issue. Citing the letters that had been sent out (in error) by the Home Office informing EU nationals that they had to leave the UK as evidence, the young people are worried that this issue is either not being handled correctly or that it is being ignored altogether by the UK.

Another major thread of conversation revolved around human rights. In general, many of the young people were concerned about the impact that Brexit will have on human rights and they therefore want the government to shift the approach it has put forward in the European Union (Withdrawal) Bill. Some argued that the EU Charter of Fundamental Rights should be incorporated into UK legislation once it withdraws from the EU as it contains important protections that may otherwise be lost (such as workers’ rights). These same people were against the removal of access to the European Court of Justice on exit day due to the potential consequences this will have for both the progression and enforceability of human rights. They want answers from the government on how this enforcement gap will be filled once the UK withdraws from the EU. Finally, young people want UK negotiators to make clearer the future of human rights protections for EU citizens residing in the UK. Much of this was captured in the following quote from attendee Leah Rea, an MA candidate in Conflict Transformation and Social Justice at Queen’s University Belfast with a particular interest in examining human rights during times of conflict:

‘A key concern for me is the lack of legislative provision for and consideration of human rights protections post-Brexit. The European Union (Withdrawal) Bill currently progressing through the Commons explicitly states the Fundamental Charter of Rights of the EU will not be transposed in the UK statute books; the Charter provides additional recognition and protection for third generation fundamental rights, socio-economic rights, such as workers’ rights, including collective bargaining and action. If the UK Government does not incorporate the Charter, it must ensure such socio-economic rights are not weakened post-Brexit.’

Many of the remaining issues highlighted by the young people revolve around economic matters. Several young people want the UK to ensure that NI will be able to maintain current trade arrangements with the EU. They fear the impact that a change in trade arrangements would have for both NI and the UK in general. Some also stated that the UK needs to focus on the knock-on effects that this would have for socio-economic rights. One of the 16-year-oldsstated that they want the UK to focus on the potential loss of millions of pounds of EU funding to Northern Ireland. Of specific concern appeared to be what the loss of peace funding would mean for peace and reconciliation programs in Northern Ireland. They want answers from the UK negotiators about whether EU funding to NI will continue, and if not, how the UK will compensate for this.

The young people in attendance were knowledgeable and thoughtful in their articulations of the ways in which Brexit will impact them. There were five main themes that emerged from this discussion: economics, identity, divineness, education, and politics.

Many of the young people feel that Brexit is going to negatively affect the economy in the whole of the UK, with particularly serious consequences for NI. They are anxious about what this is going to mean for themselves, their families, and their communities. Many of them are worried about the impact that Brexit may have on local industries that rely on trade with the EU (most commonly with the Republic of Ireland); much discussion focused on the negative consequences for the agri-food industry. Linked with concerns about the future of the economy in Northern Ireland, a large proportion of the young people voiced their fears about future job prospects. They feel that they may have to move to another country or another part of the UK in order to gain employment due to the economic damage that may result from Brexit.

Some of the young people feel that Brexit will affect their identity. These people stated that they have long identified themselves as Europeans and they are upset that they are going to lose this once the UK exits the EU. Several felt that having the option to identify as European, as opposed to either British or Irish, has provided a pivotal way for them to avoid the unionist/nationalist dichotomy.

Others feel that Brexit is going to be further divisive – specifically for Northern Ireland.  One of their main reasons for this is the potential impact Brexit will have on sectarian divides. Many stated that they are ‘fed-up’ with sectarian divisions within politics in Northern Ireland and feel that Brexit will only serve to deeper entrench these divides.

Many of the younger attendees think that Brexit is going to impact access to education. They want clarity over what will happen to students who attend school across the border on the island of Ireland. They also wondered if they will have access to higher education in European countries, if they would have to pay higher tuition fees, and whether they will continue to have access to Erasmus. Some of these people stated that they had planned to attend higher education in Europe and now fear that this will no longer be an option for them; due to the aforementioned concerns.

Finally, many of the young people feel that they will be impacted due to the effects of Brexit on politics in Northern Ireland. Some stated that they think that the Northern Ireland Assembly is not going to be up and running again – due in part to divisions and disagreements fuelled by Brexit – and that Northern Ireland will therefore fall under direct rule. They are anxious about what this will mean for future NI governance and the future representation of their voices within UK Parliament.

It was clear from the outset that many of the young people who attended this event are informed and well engaged with the debates surrounding Brexit. It is also clear that they are worried, not only about what this will mean for their own futures, but more broadly what consequences withdrawing from the EU will have for the future of NI and the UK as a whole.